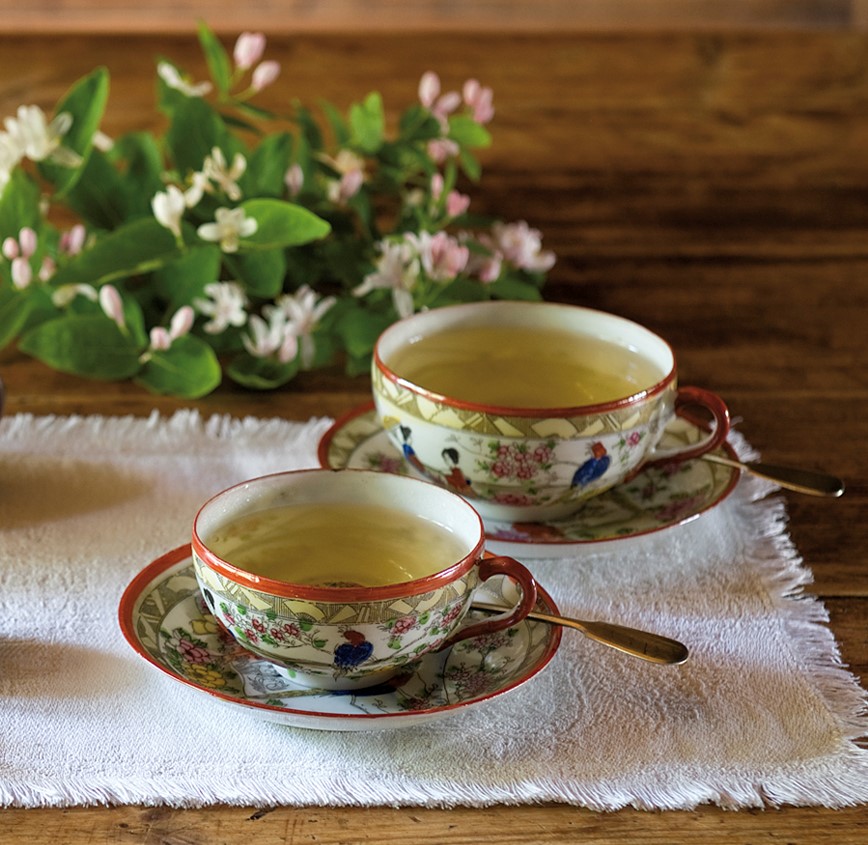 It is the particular timing of the harvest and the manner of processing that turn the tea leaves into a black, green or white tea. Percentages of caffeine vary in teas and are often listed in comparison to a cup of coffee, with coffee considered as 100 percent.

Some general rules for making tea: always use fresh water – preferably filtered water or spring water. Once tea has steeped for the suggested time period, use a strainer to pour off the tea water completely, either right into cups or into a different container. If tea is not consumed immediately, always remove the leaves to prevent the brew from turning bitter. It is a good idea to have a removable tea leaf insert in your teapot or to use two teapots, one to brew and one to serve. I personally like using two teapots, so that the leaves can have unrestricted space to expand and infuse the water with their flavor. Some inserts do not allow for generous space. Prefer loose tea to tea bags – the tea in tea bags often consists of broken or crushed tea leaves of inferior quality that have lost much of their aroma before you get to use them. I love to smell the loose tea leaves and to touch them with my fingers before placing them into the tea pot, so I never use a spoon to measure out amounts of tea – I do it by feel.

Black tea is the most processed form of tea from the tea plant. Before the leaves are dried, they are rolled to release enzymes that cause them to oxidize and turn brown. Black tea has a strong taste and contains 80 percent of the caffeine in coffee – the highest amount in teas. To brew black tea, pour boiling water over the leaves and steep for four to five minutes. Well-known black teas are called Assam, Darjeeling and Ceylon.

Oolong lies somewhere between black and green teas in terms of processing – it has less caffeine – 60 percent – and more antioxidants than does black tea. It also has a milder flavor – earthy with a sweet aftertaste. To brew oolong tea, boil water, turn off the heat, and let the water cool for about one minute. Then, pour the water over the tea leaves and steep for two to three minutes. Well-known oolongs are called Formosa and China.

Green tea is among the least processed of the teas. The leaves are steamed and then dried. They retain much of their color and antioxidant content, and their caffeine content is 40 percent. To brew green tea, boil water, turn off the heat, and let the water cool for about one minute. Then, pour the water over the tea leaves and steep for one to three minutes. My favorite Japanese green teas are called sencha (straightforward and delicate), genmaicha (51 percent tea, 49 percent roasted brown rice – half the caffeine of other green teas with a delightful aroma), and hojicha (green tea with a mild roasted flavor).

Matcha is a green tea that is traditionally used in Japanese tea ceremonies, which took place in the temples of Kyoto as far back as in the Kamakura period (1192–1333). Zen Buddhist monks used to drink matcha tea to keep awake during long periods of meditation. The tea leaves are being dried and then ground into a fine powder. To prepare a matcha tea, place a teaspoon matcha into a cup. Boil water and let let cool for a minute or 2. Pour the hot water into the cup and stir well until the tea particles are evenly distributed in the water. In a tea ceremony one would use a little bamboo whisk, but a tea spoon will do the trick as well. It the tea sits for a while the matcha powder will settle in the bottom of your cup. It is therefore best to whisk the tea once in a while. Since you will be consuming the entirety of the tealeaf, the percentage of caffeine and antioxidants will be the higher than in teas made by steeping tealeaves.

White tea has only recently made its way to the West. It is the finest of teas with a very delicate flavor and color. It is also the most expensive. White tea is made from immature tea leaves that are picked even before the buds have fully opened. They are covered with fine whitish fuzz, which gives the tea its name. White tea is minimally processed, and it has the highest antioxidant level and the lowest caffeine level – 30 percent – which makes it the most beneficial tea for your health. To brew white tea, boil water, turn off the heat, and let the water cool for about one minute. Pour the water over the tea leaves and steep for five to eight minutes. Look for white teas called white peony or silver needles.

Nothing is wasted in the harvesting of teas. Kukicha, or twig tea, is from the prunings of the tea plant. At different times of the year, clippings are steamed, sun-dried and stored in paper bags for two to three years. The process of aging helps to develop the flavor. As a last step, the twigs are ceremoniously roasted to produce their distinctive aroma. Kukicha is lowest in caffeine: 10 percent. To prepare kukicha, I like to boil then simmer the twigs for three minutes.

Find on this site